The man who burnt money while we burn our lives for it. 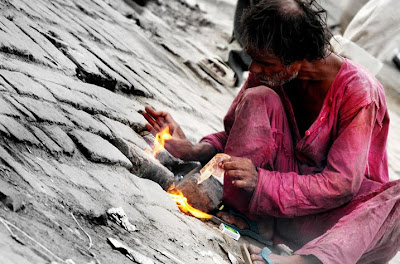 What makes me talk about money today is this one picture that always ends up disturbing me somehow...

I have often heard nothing in this world is free. For everything you get-you give something. Even the ’money’ you earn- you pay a ‘price’ for that- that ‘price’ could be hard work, your health or even costing you your own personal relationship in life at times.

A few years back I was with some guests at Agra when our car stopped briefly at a prominent crossing and I noticed slight commotion across the street. That time I used a Nikon with a 50-500 Sigma lens. Out of curiosity, while sitting in the car, I zoomed and shot couple of pics of a disheveled man burning some paper. We were there hardly few seconds so I didn’t quite follow what was happening. It was only later when I looked at the pics on laptop I realized the man was actually burning money-currency notes of Rs 10 & 20! The realization kind of unsettled me a bit.

Out of curiosity and disbelief I went again to that place after about a week looking for that man. I asked the cigarette shopkeeper n couple of other people around about that person. Different people told different stories-one said he was once a very rich man but lost whatever he had playing lottery. Another guy told me he had lost his money drinking and spoiled his life and there was another one who said while he was too busy earning money his wife left him for someone else and he could not take it and went mad. Nobody really knew the truth except that he was mad.

Either which way now he hated money -he would beg and then burn it. And then just stare at it silently even if there was a volcano inside. Burning currency is a criminal offence in any country and that place in spite of being across a police station –no one really cared. Because he was mad.

Mad? Was he violent? Did he misbehave with people? Did he scream or shout or throw stones? Nope. Mad because he was burning money while everyone was busy trying to earn it.

I wondered why someone would hate money to that extent unless it took away from him something far more precious than money itself. Are we not mad too-burning our lives chasing more n more money and then one day we realize we earned lots of it but then we lost the youth and whole lot of golden moments we could have lived with our loved ones...

Original Post by Pravin Talan
Posted by Madhukar B Raju at 9:54 AM